The regular schedules, and irregular antics, of pet birds keep veterans in a routine while being distracted by these clever birds’ personalities.

Chris Diggins, founder of Parrots for Patriots, places neglected birds with people who can care for them and feel love in return. Via Garth Noggle/Today

Parrots are smart. Parrots behave hilariously. Parrots stick to schedules. And now parrots and their particular breed of regularity and clever quirkiness are able to help former military personnel with post-traumatic stress disorder.

Parrots for Patriots places abandoned birds with veterans in the Northwest United States. The program incorporates pet birds because of their need for routine, which fosters responsibility with veterans who might feel they lack a set schedule after leaving service, according to founder Chris Driggins of Vancouver, Washington.

“With PTSD or any other type of mental disorder, your life is a little confused,” Driggins told Today. “Birds demand normalcy, and certain birds are very needy. They help you fall into a pattern — get up at this time, give me a treat at this time, give me TLC. Then you find yourself in a normal routine again.” 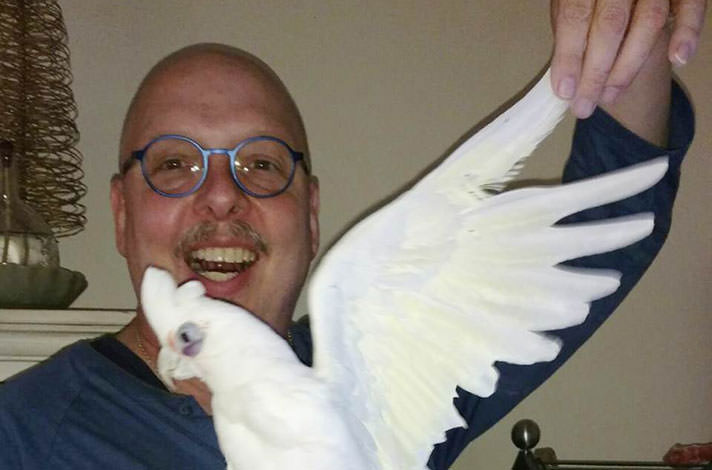 “You don’t have those restless nights where you’re up all night worrying, because the bird has exhausted you,” Driggins continued. “And if you do get up in the middle of the night, the bird will understand. There are so many things that birds can do for you that no other animal can.”

One person benefiting from Parrots for Patriots is former Marine Douglas Ladd of Portland, Oregon. He experienced emotional issues in the decades after leaving the military until he met Bare-eyed Cockatoo Cleopatra.

“You can’t get mad at her because she’s a bird,” Ladd, 62, told the news outlet. “People you can get mad at, because they’re supposed to know better.”

The parrot opened his empathetic side, which was needed. Other veterans benefit from different distinctions in pet bird characteristics, such as their longevity. Some parrots can live up to 80 years old.

Thomas and Ladd are among the ranks who have received the 90-some birds Driggins has placed with veterans since the program launch in 2015. Many of the parrots had been neglected or abused previously themselves.

This means the parrots receive benefits, too. The reciprocation is heartwarming and healing, and we can’t wait to see what the years ahead hold for these lucky birds and their new owners.