Aug 11th 2015 Lions and Parrots Pair Up for Veterans

Originally posted on The Chronicle by Amanda Frank 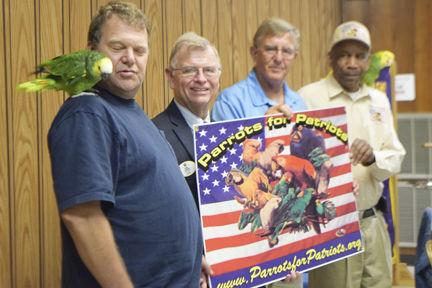 Bart Miller, left, talks to Pete, a companion bird he received through the Parrots for Patriots program, which is supported by the St. Helens Lions Club. Next to Miller is Lions Club District 36-O Governor Hank Calhoun and Zone Chairman Terry Bowman. Far right is Northwest Bird Rescue’s Chris Driggins, who started the program.

An overwhelming abundance of orphaned exotic birds combined with U.S. veterans in need of companionship has inspired a new program that has been adopted by the St. Helens Lions Club.

Parrots for Patriots, sponsored by Northwest Bird Rescue, is a program designed to match birds up with new homes, specifically with Oregon and Washington veterans who are wounded, disabled, homebound and/or retired. The concept is to provide companionship to those who may be suffering from loneliness, depression, PTSD and other conditions.

Scappoose resident Bart Miller, a Navy veteran, is one of the first participants in Columbia County to receive a companion bird, a 22-year-old blue-fronted Amazon named Pete.

Chris Driggins, president of Northwest Bird Rescue, says, “I started Northwest Bird Rescue in 2002 mainly to help out birds that were left orphaned, neglected, had gone through separation anxiety and more or less just needed a new home. We take them in, assess them, tame them, and train them.”

Driggins says the rescue currently has a waiting list to take in birds that have been removed from their home due to allergies, life changes or financial problems in the household. Birds also end up at the rescue if the owner has died.

“[Parrots for Patriots] is a win-win situation because of the amount of homeless orphaned birds that are coming to us,” he states. “It’s so important for people to know that these birds are just waiting in cages for love.”

Since launching Parrots for Patriots in June, Driggins says the rescue’s re-homing rate has doubled. In a little over two months, eight birds have been placed with veterans residing as far north as Bremerton, Wash., and as far south as Salem.

Veterans pay a $25 application fee, and those who are paired with birds will also pay adoption fees. Financial assistance is available to those in need, and approved members can also receive a discount card to assist with food, veterinary and other costs.

Each match starts with a process to ensure that the bird and the candidate are a good match.

“We always do a home visit first, and then a meet and greet with the bird,” he explains. “And if the bird doesn’t like the person, then we go onto the next bird, and we match them up.”

When a connection is made, the bird finds a loving home and the veteran gains a companion.

“They keep you responsible,” he says of the birds. “You don’t get depressed because you have the responsibility to feed them, to entertain them. You’re their world.

“It’s a win-win situation that we found,” explains Driggins, who started rescuing birds in 1986. “We’re trying to help out the lonely veterans who are disabled, handicapped, or just single that need a companion. These birds can live to be 80, 90 years of age, so they go through sometimes six to eight homes in a lifetime.”

A veteran who served in the 82nd airborne out of Fort Bragg, N.C., Driggins said he is grateful to the support the program has received from the St. Helens Lions Club. Coincidentally, his father was a Lion, and served as a club president in Jackson, Mich.

On July 4, Northwest Bird Rescue launched a second program, Woofers and Tweeters, which pairs veterans with bird and canine companions.

Driggins says he hopes the program attracts some individual and corporate sponsors to help purchase birdcages and food, as well as assist with care and transportation expenses.

“They needed someone to step up and be the first,” he says.

“We’re proud to be the first sponsor of getting this program going, and I sincerely hope that it gets national attention,” Larson praises.

He adds, “It not only makes me feel good to do this, but it makes the whole club feel good and that’s what it’s all about.”

As part of the Oregon Lions Sight & Hearing Foundation, the club also collects eyeglasses and hearing aids to be refurbished and distributed abroad; provides financial assistance to individuals who need glasses; and conducts vision screenings at local elementary schools.