Skip to content
Previous - Jan 5th 2017, Parrots for Patriots Pairs Rescued Parrots with Veterans in Need Next - Aug 11th 2015 Lions and Parrots Pair Up for Veterans

Decades after leaving the Marines, Douglas Ladd of Portland, Oregon, struggled with anger and other emotional issues.

“You can’t get mad at her because she’s a bird,” Ladd, 62, told TODAY. “People you can get mad at, because they’re supposed to know better.”

Veteran Doug Ladd of Portland, Oregon, with his bird, Cleopatra

Ladd is one of many veterans turning to birds as therapy or emotional support animals thanks to Parrots for Patriots, a program that pairs abandoned birds with veterans in need throughout the Northwest. Birds are helpful because they provide routine and responsibility that some veterans — especially those who have post-traumatic stress disorder — feel they lack after leaving service, founder Chris Driggins said.

“With PTSD or any other type of mental disorder, your life is a little confused,” Driggins, of Vancouver, Washington, told TODAY. “Birds demand normalcy, and certain birds are very needy. They help you fall into a pattern — get up at this time, give me a treat at this time, give me TLC. Then you find yourself in a normal routine again. You don’t have those restless nights where you’re up all night worrying, because the bird has exhausted you. And if you do get up in the middle of the night, the bird will understand. There are so many things that birds can do for you that no other animal can.”

Sure enough, the intelligence of birds, particularly parrots, has been highly documented. In a popular TED Talk from 2006, an African grey parrot named Einstein demonstrates an impressive vocabulary and the ability to respond to questions. (He does a great Matthew McConaughey impression, too.) 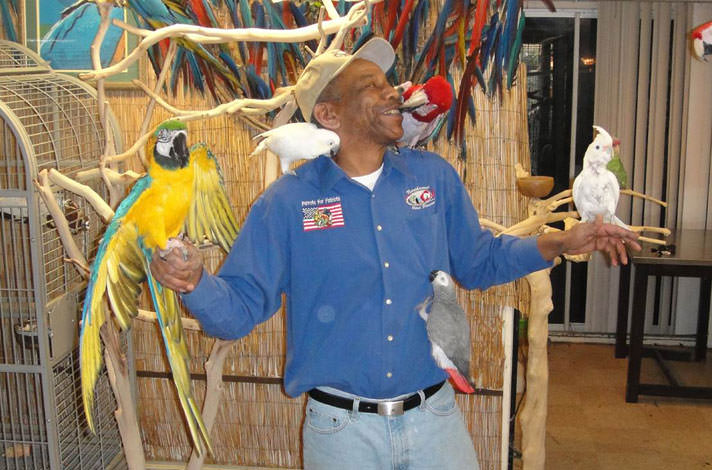 Parrots also live longer than most other pets, such as cats or dogs, which partly explains why there are so many abandoned birds, said Driggins, who also runs Northwest Bird Rescue.

“The birds outlive the humans is what it boils down to,” he said, adding that some parrots can live to around 80 years.

That’s exactly why veteran Paul Thomas, who served in the Air Force from 1999 to 2003, turned to birds.

Thomas, who lives in Battle Ground, Washington, now has three birds, including an African grey named Sabrina he got through Parrots for Patriots.

Driggins has placed around 90 birds — many of them neglected or abused — with veterans since launching Parrots for Patriots in 2015. One of his recent recipients is David Haro, a Navy veteran in Eugene, Oregon, who has PTSD.