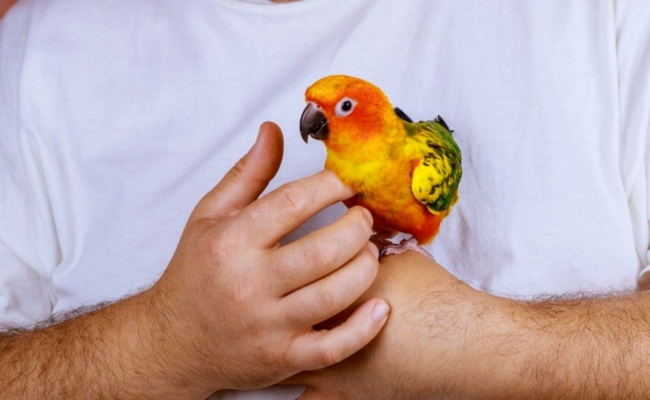 PTSD can be a terrible and insidious health problem and a hard one to treat because of the many layers of trauma that can underpin the condition.

But animal companions, and recently birds, like parrots, have proved to be a powerful source of joy and wellness for people dealing post traumatic stress. To understand why birds are particularly good companion animals for people with PTSD, it’s first worth learning a bit about the health problem.

Post Traumatic Stress Disorder is usually caused by a significantly traumatic event or prolonged exposure to trauma that may span months to many years. PTSD usually occurs right after the event itself, but in some cases it may show up several months or even years after the catalyst event.

The way PTSD manifests can be different for every person dealing with this condition and can depend on the trauma that person endured. However, common symptoms can include flashbacks or nightmares of the traumatic event itself or stress responses such as pain, sweating, feeling sick and trembling, to name just a few. These may occur as a result of stimuli that “trigger” the memory or may come on without warning.

PTSD is perhaps most widely understood by the general public as a condition affecting combat veterans, whose prolonged exposure to scenes of war and combat have had an impact on their mental wellbeing.  However, PTSD can occur among almost all demographics. Women—for example those who have been in an abusive relationship—or children who have undergone prolonged stress or suffered the loss of a parent can also suffer from PTSD.

PTSD can manifest through persistent negative self-talk that reinforces the person’s feelings of anguish surrounding the event. It can also lead to a state known as “hyper arousal” which might best be explained in this context as someone always being on edge. This can lead to sufferers having short tempers or being quick to anger or upset. In some extreme cases, PTSD can cause angry or even violent outbursts, though the actual number of PTSD sufferers who are violent is much smaller than media portrayals lead us to believe, and there is surprisingly little evidence to specifically link PTSD with violence.

Other problems that can manifest because of PTSD include an inability to concentrate, a “mental fog” state and an avoidance problem where sufferers will attempt to minimize their negative feelings. This can lead to sufferers not seeking treatment, avoiding responsibilities or stressful situations like employment, or attempting to medicate themselves in a variety of ways. Self-medication can manifest as obsessive behaviors, like over-exercise, through to alcohol and drug use, casual sexual encounters and more.

HOW IS PTSD TREATED?

It is possible to successfully treat PTSD, but it is among the more complex class of mental health disorders. PTSD is distinct from panic disorders and depression, but the conditions can overlap, meaning that treatment has to take in some or many of these factors.

Treatment often involves therapy of some kind, sometimes underpinned by various medications designed to give the emotional breathing room for that therapy to take effect. These can include:

However, PTSD sufferers can find it hard to undergo therapy precisely, because it’s difficult to relive or deal with the past trauma that they have struggled with. This is where support animals can be effective.

Support animals don’t magically make PTSD symptoms go away, but they do offer love and support that can anchor people dealing with PTSD. Dogs and other support animals are also good at picking up when their human companions are in distress and lend support without their human needing to specifically communicate their distress, something that PTSD sufferers can find very difficult.

In addition, the very act of having to care for an animal can help bring a focus to the lives of PTSD sufferers that is outside of their own distress, thus helping to break the negative thought patterns or at the very least offering distraction.

WHY BIRDS ARE SO HELPFUL FOR PEOPLE DEALING WITH PTSD

Some birds, such as ravens and parrots are incredibly intelligent and can learn to understand or even mirror basic language skills. Birds also display some surprisingly “human-like” behaviors, but at the same time have particularized and often demanding needs to which a human companion will have to attend. This creates a new dimension of interactivity for PTSD sufferers.

While there is a lack of specific wide-scale research on birds as animal companions for PTSD sufferers, there is growing anecdotal support for their abilities to help. So much so, in fact, that a number of groups, including Parrots for Patriots, have launched with the specific aim of matching abandoned birds with veterans who may be in need of an animal friend to care for and from whom they can take support. These birds don’t just help PTSD sufferers, but they may be particularly well-served by this scheme.

Below is a video from Serenity Park Sanctuary that demonstrates what a difference various schemes like this can have for veterans and people dealing with PTSD: