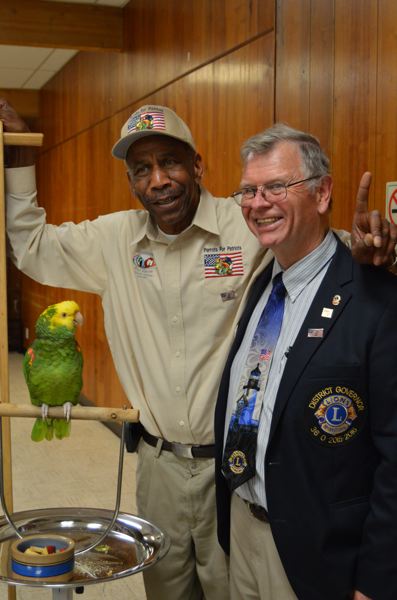 Scappoose resident Bart Miller chuckled over the phone, realizing the warbling in the background was an avian echo of his own laughter.

Miller is the new recipient of Pete, a 22-year-old Amazon blue-fronted parrot, thanks to a new program started by Northwest Bird Rescue founder Chris Driggins.

Driggins started Parrots for Patriots, a program that pairs the vibrant birds with veterans and their families.

The program kicked off in June and Driggins said he’s already had overwhelming demand. He cares for more than 40 birds, not all parrots, at his Vancouver, Wash., home.

With the new veterans program, he’s hoping to pair orphaned parrots with veterans who have the time and commitment necessary to properly care for the birds.

“It’s been on my mind for a couple years, being a veteran myself,” said Driggins, a U.S. Army veteran who has post-traumatic stress disorder. “The birds have helped me out tremendously with my PTSD. I realized that I could depend more on animals than humans.”

Those who know him and his nonprofit endeavors have dubbed him “Bird Man.”

Miller doesn’t hesitate to call him “an absolute jewel.”

Driggins and his associate, Lise Nadson, who also helps train animals as part of the nonprofit, visited St. Helens Monday evening, Aug. 3, to introduce his program to the St. Helens Lions Club, the first chapter of the Lions Club to sponsor a parrot adoption for a veteran.

“You guys are the ice breakers,” Driggins told club members.

The partnership seemed fitting. Driggins’ own father was president of his Lions Club in Jackson, Mich., during the mid-1960s. Driggins served in the Army’s 82nd Airborne Division at Fort Bragg before he located to the Pacific Northwest.

The partnership between the Lions and the newly founded adoption program was catalyzed when Driggins met Hank Calhoun, district governor for the Lions Club’s District 36, at a barbecue in Sandy. Calhoun learned about Driggins’ endeavor to match parrots in need of homes with veterans who could use the companionship. Calhoun quickly got on board, as did the rest of his club members.

“We’re proud to be the first sponsor for Bart,” Martin Larson, president of the St. Helens Lions Club, said Monday. “I hope it gets national attention.”

Miller was paired with Pete less than two weeks ago. The two have been just about inseparable since then.

“They will attach themselves to their owner in a remarkable way,” said Miller, who served in the U.S. Navy. 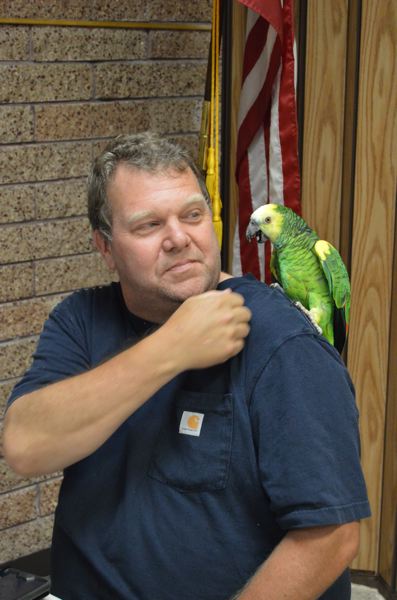 Miller speaks from experience. He said he’s had a pet parrot in the past, which is what drew him to Parrots for Patriots when he noticed the organization’s sign in Portland’s Starlight Parade.

He called to learn more, but was steered away by the adoption fees, which can be several hundred dollars.

Driggins connected the dots and Miller became the first veteran to have his bird’s adoption fees sponsored by his local Lions Club.

Parrots are dynamic birds that require a different level of attention and care than most domesticated pets, Driggins said.

Because parrots can outlive humans, Parrots for Patriots requires each adopter to take a training course and do a meet-and-greet during a home visit.

The program is designed to find forever homes for the birds, who often come to Driggins after being shuffled from several different households.

“With birds, 7 to 10 years happens, the newness wears off, then they get shoved in a back room,” Driggins said. “Life changes and they get set aside. We are here to assess and unwind the neglect. We build a bond and teach them humans are going to be good to you.”

Each adoptive parent must also designate a legal guardian for the bird in the event the owner dies or can no longer care for the bird. If a bird is placed in their home, they qualify for assistance with food and supplies.

“This is kind of a step up with parrots,” Miller said. “They have more human characteristics. You get attached in a different way with them.”

Those interested in the program don’t have to prove honorable discharge and don’t necessarily have to have served.

“This is also for spouses of veterans,” Driggins said.

Parrots for Patriots isn’t the first to take on a nonprofit effort to pair veterans with animals for therapeutic results, and he’s not the first to match parrots with veterans, but in the few short months after the launch of his program, he says he’s already fielded dozens of requests and found homes for seven parrots.

As for Miller, who is no longer married, he figures adopting Pete isn’t too far off from that commitment.

“I’m not sure I want to get remarried,” he said, “but I guess I’m married to the bird.”